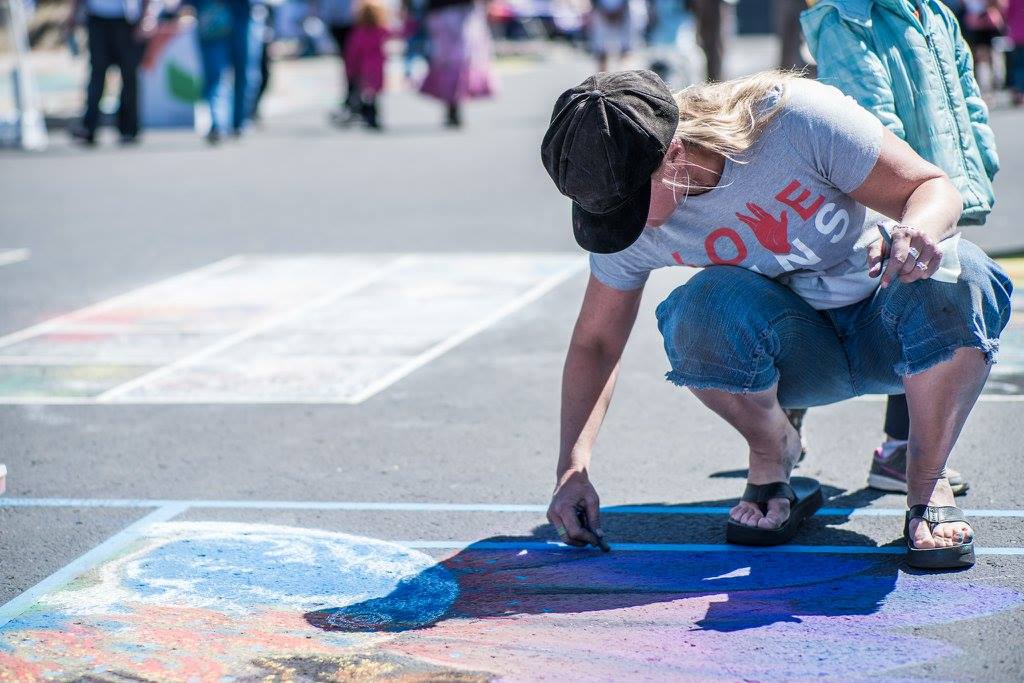 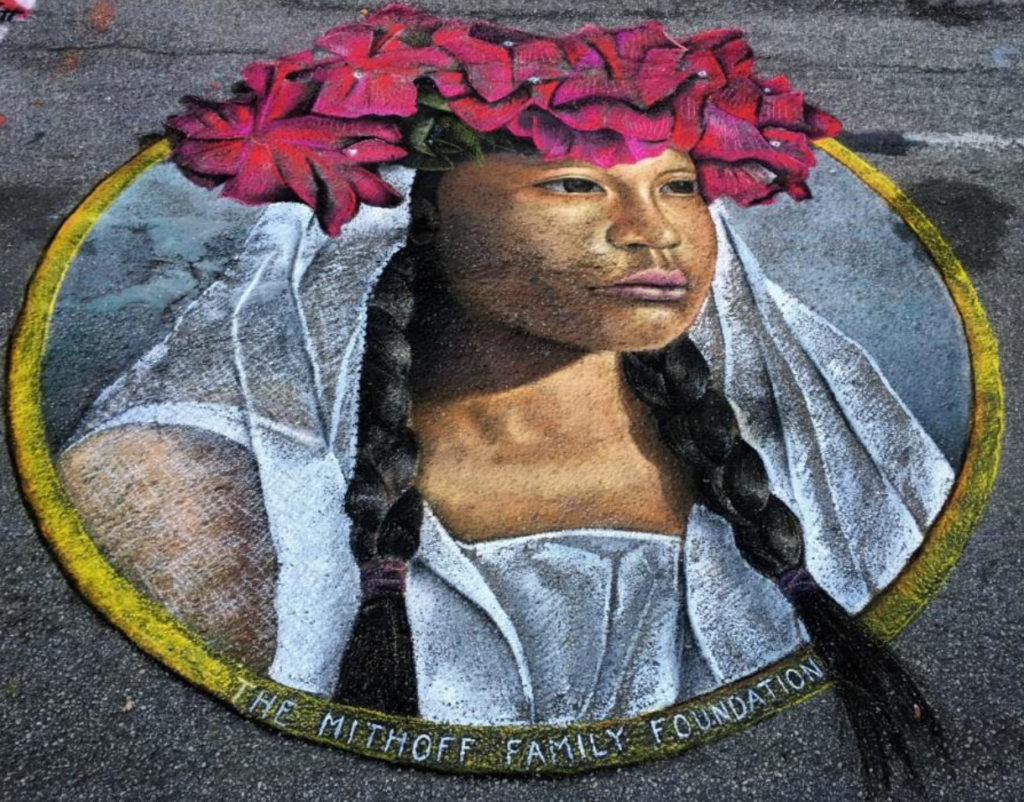 Ruben Mtz. Arriaga Graduated from the School of Architecture; UANL. He began his artistic work in 2004 by implementing the pastel technique on the pavement, which has earned him recognition and invitations to the International Festivals of Street Painting, such as the Bella Vía Mexico Festival, in which his work has been awarded (2008). In 2013 he obtained the highest category “Maestro Madonnaro”.

He was part of the cast of honor at the 2nd International Festival of Street Painting of Toulon, France as well as the Concorso Internazionale dei Madonnari di Nocera Superiore, Italy (2011). During 2012 he is recognized with the Parco del Mincio Special Prize and in the present year he obtains the Opera Segnalata medal in Grazie Di Curtatone, Italy, later in 2018, he obtained the second place.

Recently his special appearances in the world of art and painting have been for Houston Vía Colori, Texas (2013), Disney Chalk Festival, Florida (2013), Sarasota Chalk Festival (2014). Currently, he has participated in more than 40 Street Painting Festivals in Mexico, Italy, France, Germany, Austria and the United States of America. 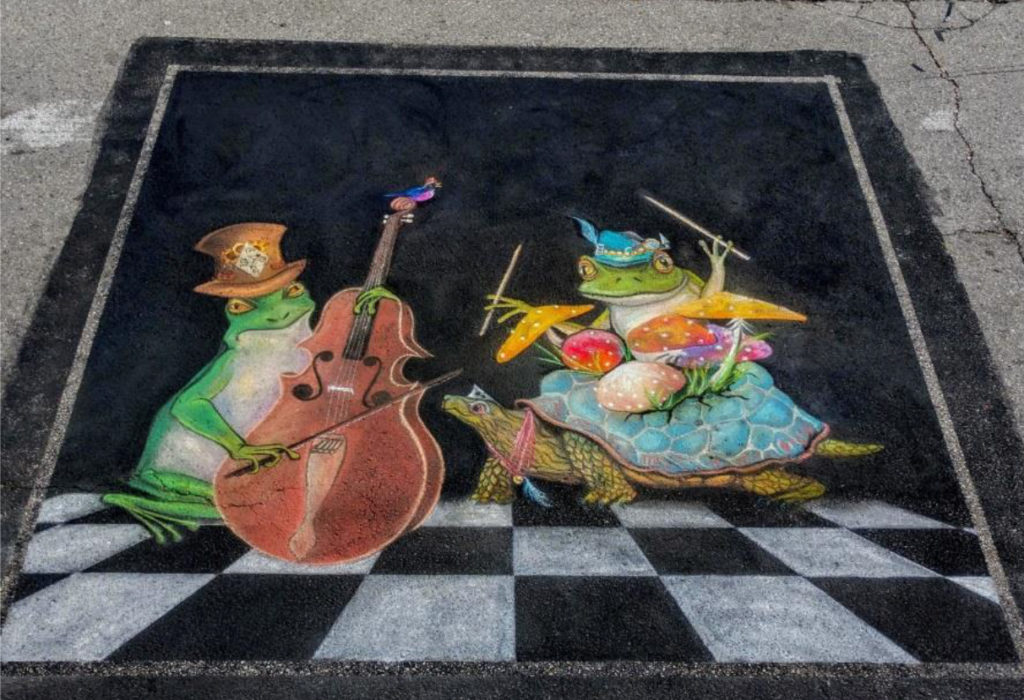 Gloria Ing brings 16 years of chalk art experience. A four time Best of Festival winner at the renowned Pasadena Chalk Festival. Gloria has chalked murals throughout the state of California and expanding to other locations. The ADP innovation center is among several sites that houses Gloria’s commissioned projects. A graduate of Cal State University, Los Angeles with a Bachelor of Arts; Gloria has creative experience in sculpting, printmaking, acrylic, chalk, wire art, oil paintings, signage and various other mediums. Gloria also owns an online custom design jewelry and accessory business. Gloria is delighted to be given the opportunity to partake in this year’s chalk art. 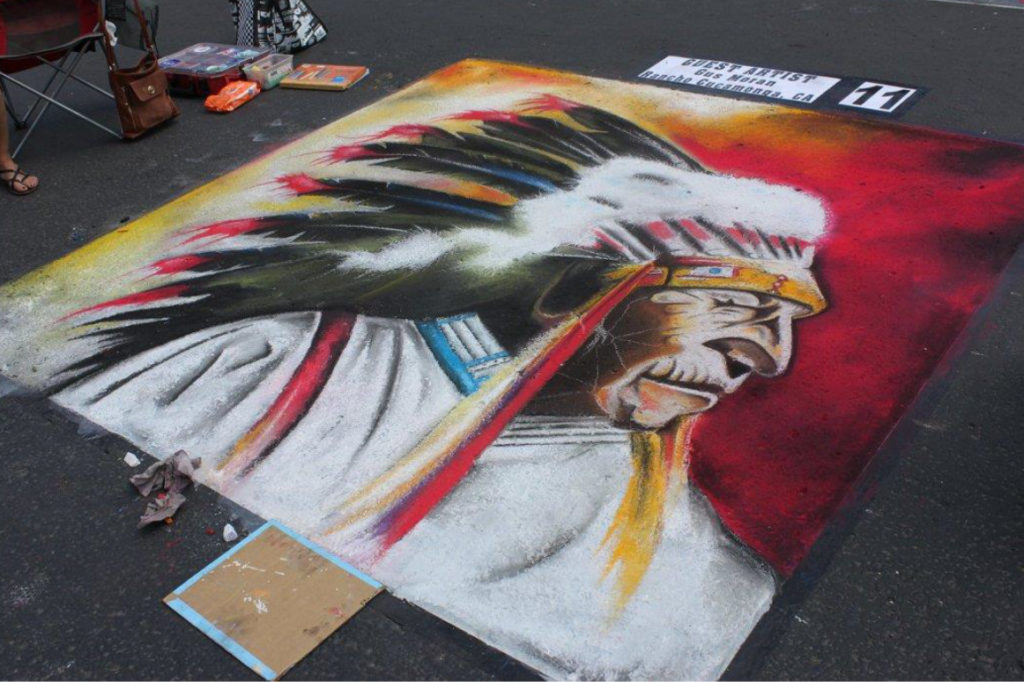 Gus Moran is a native of CA, raised in the city of Baldwin Park, just 15 miles east of Los Angeles. Gus is a single father raising 3 children, Christopher, Amanda and Sophia. He studied art at Mount San Antonio College and Fullerton College in CA. His early influences were Pablo Picasso and Romero Britto. Gus studied their use of cubanism, which was a big part of his early work while painting on canvas, using mainly acrylic paints. Romero Britto’s use of bright and bold colors still influences Gus’ work today. Gus began using chalk pastels in 2004 when a friend suggested he sign up for a chalk festival in Pasadena CA. This festival would become one of many that Gus now attends yearly. His favorite part of festivals is the interaction with the crowds and children, learning new techniques and the comradery there is between all the artist. He has been invited to events in Florida, Arizona, Colorado and Washington along with many in CA, places like Mission Viejo, San Diego and Ventura to name a few. Gus has also created large murals for KIND Natural Snacks at the Anaheim Convention Center, Walking With Dinosaurs at the Honda Center and the Festival of Arts in Palm Springs CA. He says art is more than a passion for him, it’s also therapeutic. “For me art is more than the finished pretty picture you see, it’s years of struggle, pain, laughter, love and hope that go into any mural I paint,” he said. “It’s helped me to heal at some of the most vulnerable times in my life. Picasso said, “All children are artists, the hard part is remaining an artist when we grow up.” 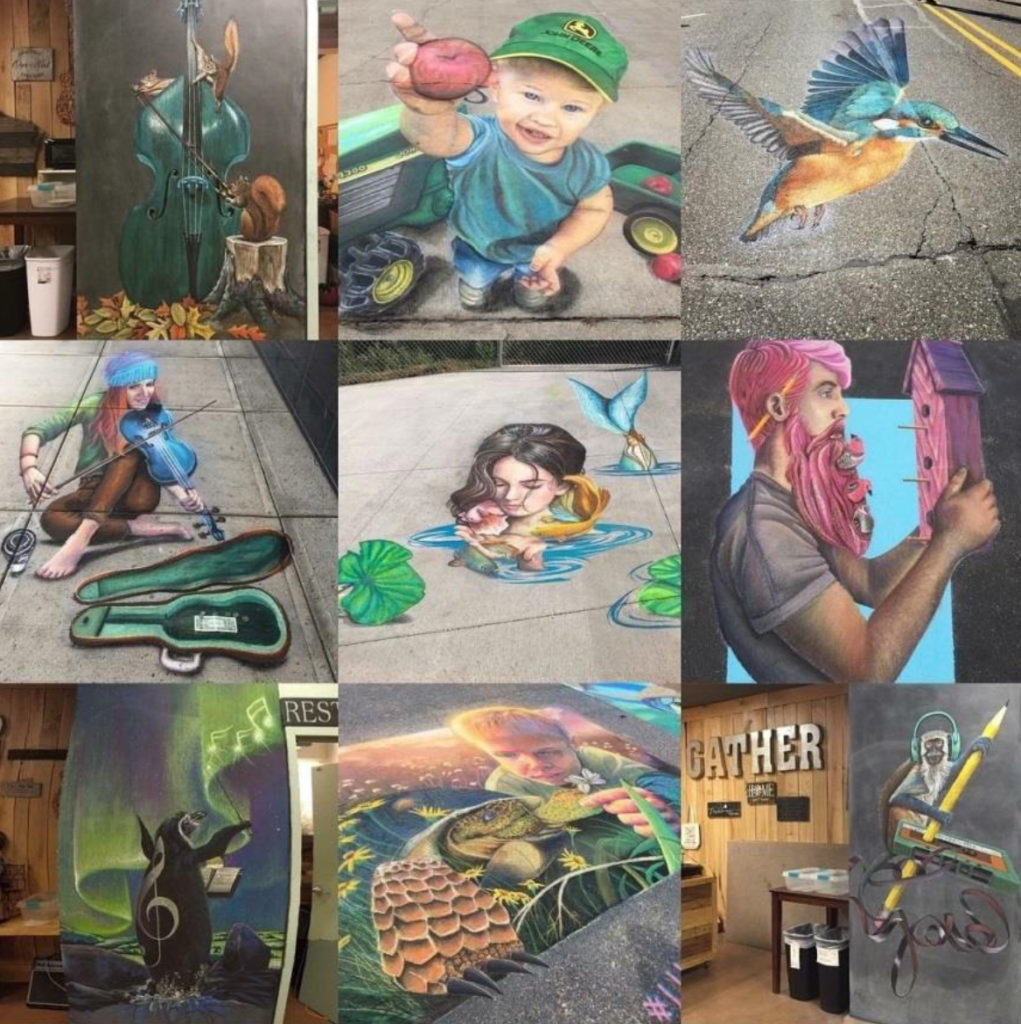 Richland Center Wisconsin Art Teacher Duo, Jamie and Craig Rogers have been collaborating since they met in high school. Both graduated from UW Oshkosh for art education. Their collaborative efforts started focusing on street painting when they decided to celebrate their wedding by joining their first chalk festival in 2010. Since then they have been featured artists at several events and festivals, taught chalk art workshops, presented a lecture on ephemeral art in nature to UW Oshkosh’s Artscore, and taught thousands of students in the public school system. Their current source of inspiration is music, human interaction with nature, and their two children. 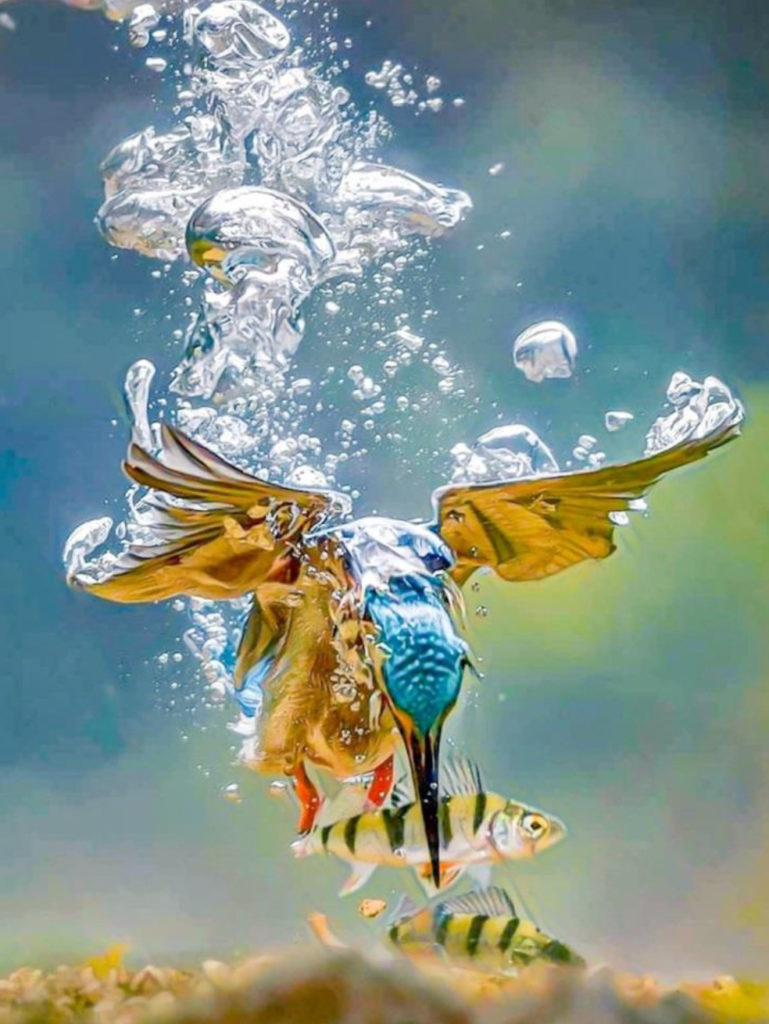 It all started with a mural at a nightclub in Denver back in 1995. A few years later, I ended up apprenticing for years with a professional mural and sign painter, to learn how to paint large scale artwork and signs. I discovered the benefit of working with other artists in a team setting for five years after helping to create a neighborhood art walk, and in 2004 I fell into love with creating chalk, and interactive street art. That lead me to get involved with the Denver Chalk Art Festival, serving on their artists committee for many years now. I started and still run my own art studio, and live with my family in Morrison, Colorado. I’ve been trying to live my best life, for almost my whole life! For more information and such, please visit my website. Thank you, Randy Segura Arthotspot Studios www.arthotspot.com 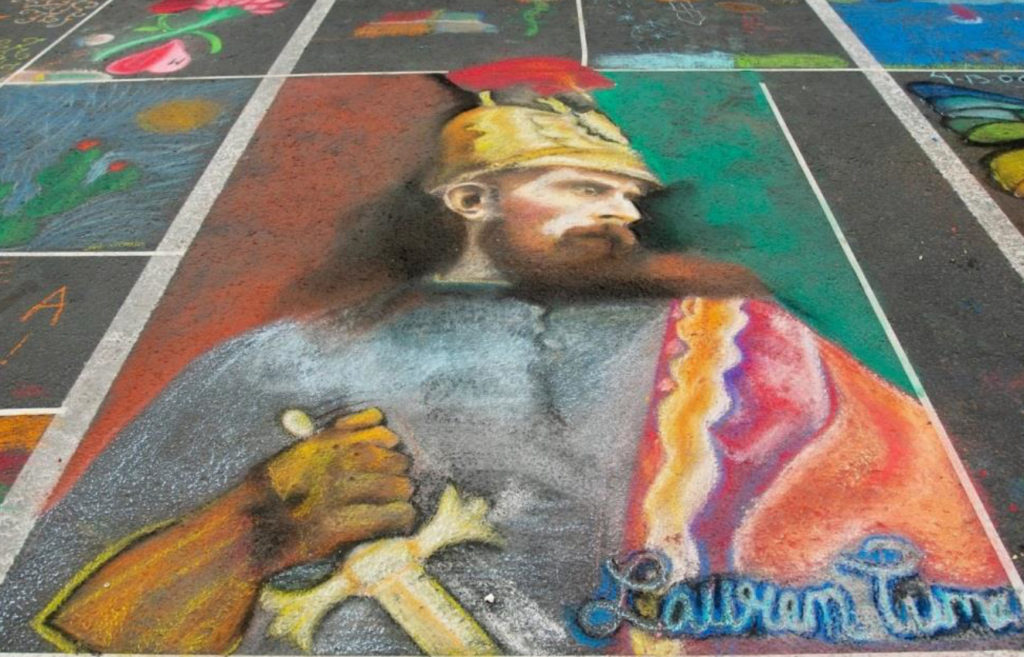 Born and raised in southern California, Lauren Tuma, continues to pursue her passion in the fine arts in the town of Queen Creek, Arizona. Though she enjoys capturing any subject, portraits are her specialty. At age 27, she is self taught and has been creating art since the first time she could hold a paint brush in her hand. Rembrandt, DaVinci, Degas, Monet and Renoir are her major influences. Using a wide range of mediums, from oils to digital, chalk pastels seem to be the most fun and quickest form of medium to project the way she sees the beauty in the world. 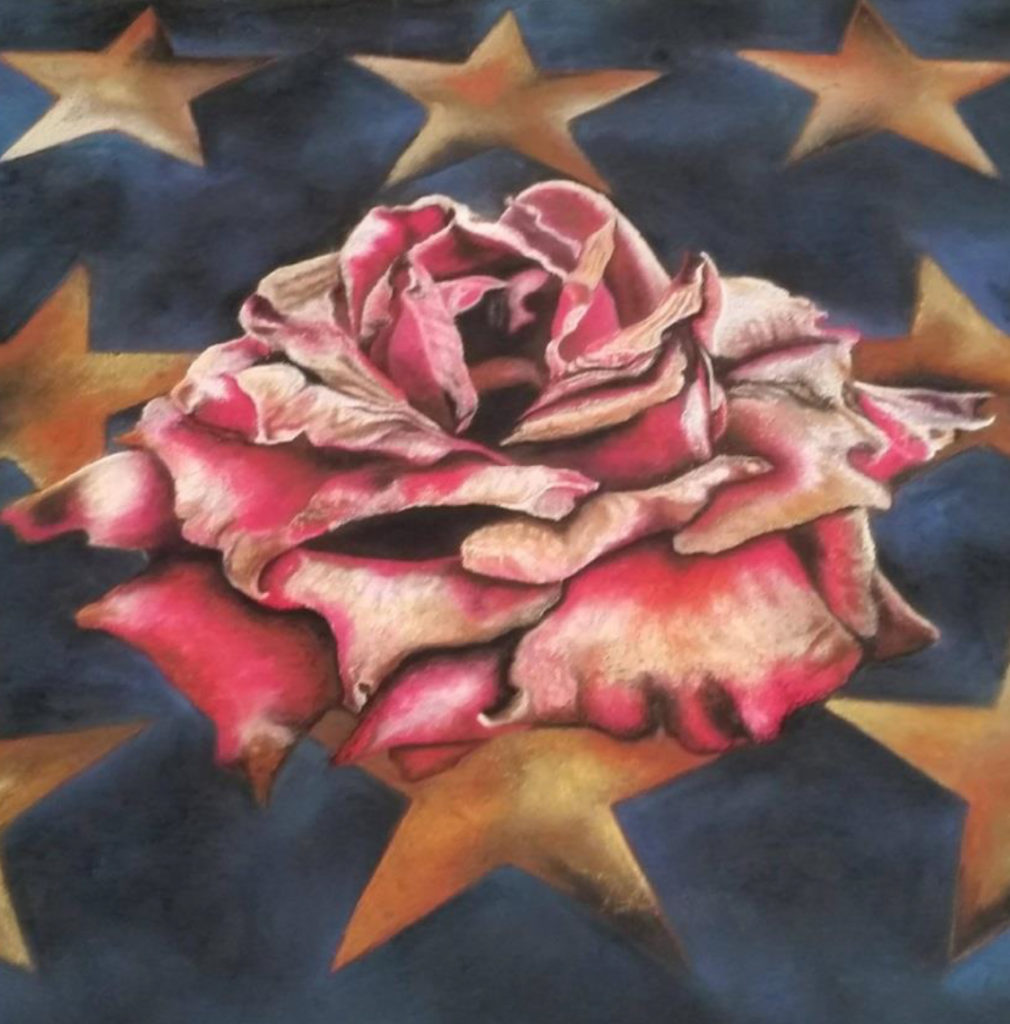 Holly Schineller is a resident of Tempe, Arizona, who attended both the California College of Art and Arizona State University to complete her Bachelor’s Degree in Studio Art. Visual Art is her means of processing the inspiration she finds in nature, the sciences and mathematics. For the last seven years her commercial work has been focused on glass fusing including functional serving pieces, trophies and architectural installations. Her work appears in public institutions and private collections. Holly also teaches beginning warm glass classes in Tempe. She spends the majority of her volunteer time in the artistic and nontheistic communities focusing on raising questions and hopefully inspiring people. Her work also includes drawing, painting and street painting. Holly enjoys getting people excited about Science and bringing its beauty to the street. “The pastels allow me to create images and express ideas I can’t always convey in glass.” You can see some of her glass on her Facebook page or her street painting work on Facebook page Holly Grounded – also on Instagram. Holly joins Chalk It UP! Prescott for her 9th appearance. She served as one of the featured artists at the 2012 event.

Please complete this application and click SUBMIT to send it to Chalk It Up! Prescott.  Sending an application does not imply automatic acceptance. Space is limited to approximately 10 people.

Application deadline is January 31, 2019.  Selected artists will be notified by March 1, 2019. In addition to your application, please email 2 photos of your recent work to l.carlock@wygc.org.  You may choose to mail or email additional information or a resume in addition to this application.

Apply here and submit your application prior to January 31, 2019! 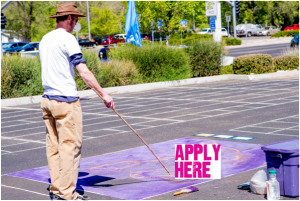 Artist Video from BK Lyons from the 6th Annual Chalk It! Prescott 2014.

Art From the Past